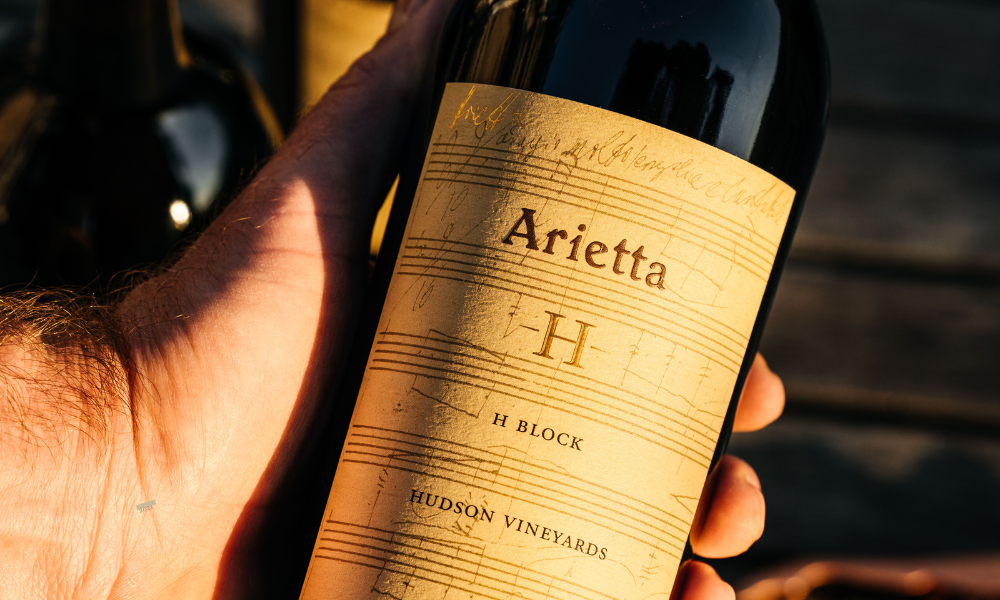 “Wines born of a passion for music” succinctly describes both the origins and the personality of Arietta.  The seed was sown on a warm evening in June 1992 when wine specialist and auctioneer Fritz Hatton met winemaker John Kongsgaard and his wife Maggy at a dinner party in Napa.  Paula Kornell, Chair that year of the Napa Wine Auction, deserves full credit for “setting up” two people whom she knew to be crazy about classical music.

Fritz had just begun a sabbatical to return to the study of piano. John had founded and managed Chamber Music in Napa Valley, and for ten years had been inviting the world’s greatest classical musicians to the Valley to perform for local audiences.   After dinner, John and Maggy invited Fritz to their house for a “nightcap,” which evolved into three hours of listening to various live recordings of Wagner’s opera “Die Walkure” improved by several bottles of wine.

That memorable evening of blending great music and wines was not to be a one-time event.  John’s method of recruiting famous musicians to play in his concerts included promises of merrymaking with Maggy’s home-cooked food and great wine, and Fritz was only happy to help. Every four to six weeks, musicians and local friends would gather at the Kongsgaard’s house on top of Spring Mountain for musical bacchanals, some of which continued for two days. As the number of sessions increased, so did the size of the piano, from a broken-down old upright to a Chickering to a Steinway grand.  No music-making was required of the pros in attendance, but after a couple of glasses of wine most obliged.

Passion was rewarded more than perfection as the evenings passed into the wee hours. Musical roles were occasionally reversed, notably one evening when Fritz warbled the Schumann song cycle Dichterliebe while the world-famous pianist Garrick Ohlsson played the piano part, singing the odd high note when Fritz’ voice failed.  Fritz decided that one year of this kind of sabbatical was not enough, and extended it to three years.

When economics dictated a return to work, serendipity arrived in the form of a phone call from Christie’s inviting Fritz back to New York to run its wine department.  By then John had decided to leave his winemaking job at Newton Vineyards and start his own brand. By some combination of chance or design, John decided to ask Fritz to partner with him in what was initially described as “a barrel of wine.”

John was particularly interested in making a wine featuring his favorite block of vines, the “H Block” Cabernet Franc planted by Lee Hudson in 1986.  It began with the “snitch” of a barrel’s worth of grapes in the fall of 1995.  This initial barrel grew to 300 cases of the 1996 vintage (the first commercial release). Since this was much more than the partners could drink together at their musicales, Fritz agreed to sell the balance of the wine. When John suggested later that the partnership take the entire block, yielding 650 cases, Fritz realized that he would need to leave Christie’s and return to the West Coast to manage the growth of the brand.

In 1996 Fritz met Caren Frutig, who happily joined in the festivities and became a partner in the brand.  Caren, a professional marketer, played a vital role in developing the brand from that time forward. John and Fritz had struggled to find a name. Caren guided them back to their music books, where she was sure the name was to be found.

Whereupon Fritz picked up his volume of Beethoven’s piano sonatas, threw it open, and looked down on the “Arietta,” the opening of the final movement of Beethoven’s last piano sonata Opus 111 and a revelatory and revolutionary passage in classical music. This was the eureka moment for the brand. The Arietta movement expressed what we believe to be the shared aspiration of great music and wine: to achieve a more exalted state of consciousness.  Our discovery of the name Arietta was just in time for the bottling of the 1996 vintage in the summer of 1998.

When Lee Hudson planted the H Block in 1986, Carneros was widely believed to be too cool a climate to grow Cabernet Franc to maturity.  Lee however admired the varietal, and his friend the grower Tony Truchard had planted a one-acre block nearby which was producing good fruit. With John Kongsgaard’s encouragement, Lee took cuttings from the Eisele and To Kalon Vineyards and planted 2.4 acres of Cabernet Franc in rocky soil at the highest point of his original vineyard.  The fruit was so promising that the world-renowned oenologist Michel Rolland took barrel samples back to Bordeaux to show his colleagues that he thought truly great Cabernet Franc could be grown in Napa.

John, Fritz, and Caren are all lovers of old-world wines, particularly the wines of Bordeaux.  In the Right Bank of Bordeaux, Cabernet Franc almost always finds itself blended with Merlot, so we decided to make it a “minority partner” of the H Block Franc. Compared to most other Right Bank Bordeaux-style wines, the H Block wine is an unusual “reverse blend.”  Chateau Cheval Blanc, the most famous of all the wines of Saint Emilion, is the most notable example of a Right Bank Bordeaux blend in which the proportion of Cabernet Franc exceeds the Merlot.

The 1997 vintage produced copious quantities of spectacular Cabernet Franc in Napa, and this was the breakthrough vintage for Arietta. We are always on the hunt for well-kept bottles of this wine, the only wine made by Arietta in this vintage. In 1998 we started making Merlot, in 2000 the Variation One, and in 2003 Cabernet Sauvignon, but the Arietta Red Wine, renamed Arietta Red Wine H Block Hudson Vineyards in the 2000 vintage, remains the sentimental and sensorial favorite in the Arietta Wine portfolio more than a quarter century after its first harvest.